Ben A. Vinson, Jr. has over a decade of experience working in asbestos law, beginning his career at Fleming & Associates in Houston, TX. At Fleming & Associates, Ben began work as a law clerk in December 2009, eventually working as an investigator in May 2011. In April 2012, Ben was admitted to practice law in the state of Florida, and in July 2012, he left Fleming and Associates and formed his own practice, Vinson Law P.A., and continued working in asbestos-related law.

Ben earned his J.D. from the South Texas College of Law in May 2011, notably finishing the program 6 months ahead of schedule. Ben also competed in Mock Trial Summer Academy at the United States District Court for the Southern District of Texas. He earned his B.A. in Economics from the University of Texas in May 2003. Ben is also a 2013 graduate of Gerry Spence’s Trial Lawyer’s College.

In February 2014, Ben opened his practice further to begin working on auto collision and personal injury cases, and in April 2014 was admitted to practice in the United States District Court for the Southern District of Illinois. Ben is a 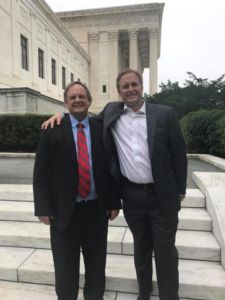 In October 2016, Ben obtained a 3.4 million dollar Hillsborough County, Florida jury verdict. His client had suffered a traumatic brain injury when rear-ended by a tractor-trailer. Also in 2016, Ben filed a class action suit on behalf of allegedly defrauded patients of the Lung Institute. On December 1, 2019, the Washington Post‘s lead story in its print edition was about the case. In 2020, Ben Vinson and co-counsel achieved class certification status on behalf of over 900 deceived former patients.

In 2017, Ben Vinson was named US Supreme Court Bar Member, & “Officer of the Court”.

In 2019, Ben Vinson was selected to the 2019 Florida Super Lawyers Rising Stars list. No more than five percent of the lawyers in Florida are selected by Super Lawyers and no more than 2.5 percent are named to the Rising Stars list. Super Lawyers evaluates outstanding lawyers who have attained a high degree of peer recognition and professional achievement by using a patented multi-phase process that includes a statewide survey of lawyers, an independent research evaluation of candidates and peer reviews by practice area.

Ben gained entry in to the Multi-Million Dollar Advocates Forum in 2017.  Established in 2007, the Multi-Million Dollar Advocates Forum is one of the most prestigious groups of trial lawyers in the United States.  Membership is limited to attorneys who have won verdicts of two million dollars or more.  Ben was awarded entry in 2017, and qualified again in 2019.